To the rest of the world outside of the United States: we don’t all agree with a Trump presidency.  The racist, sexist, homophobic and uneducated of the U.S. inched by, and the rest of us are dying inside.

Joan Rivers was a vivacious, inspirational and amazing woman.  I am missing her hard.

All right, let’s talk about the real issues for once.  The real, white-centered, heterosexual, whole pig-eating, cow-dung shoveling truth.  The world is about to end because of an Indian (not the Native American kind, the “Arab” kind of Indian).  And her hot body, white pearly teeth, and white-person accent are to blame.

Just kidding.  But, if you don’t keep up with the Miss America pageant, which in and of itself is completely problematic, sexist and racist, a brown-skinned woman won. Before we discuss, let’s put aside a discussion of the pageant as a whole, and pretend that it’s a totally legit competition.

Last night a woman, born in the United States, raised in New York and mostly in the Midwest, with ancestors that were 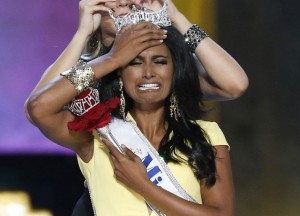 born in India, won Miss America.  The Facebook and Twitter comments following her crowning in protest called her an Arab, a terrorist, and some so eloquently wrote “9/11 was 4 days ago and she gets miss America?” and “So miss america is a terrorist” (way to capitalize that “A”).  So, as a white gal feeling some cultural shame and feeling that I need to educate my white/”American” comrades and in the hopes that all Arabs, Indians/Asians, Blacks, and basically every other race won’t completely lose all faith in the Caucasian race, here are a few explanations:

Regarding geography: I suppose we should start with the obvious (or maybe not so obvious)- Indians and “Arabs” are not the same.  People who are of Arab descent hail from the Middle East and the northern hemisphere of Africa.  India is to the east and sometimes west of many Arab countries, and is actually just a stone’s throw away from China.  Comparable to Chicago and the rest of Illinois.  They’re close, but oh so very, very far away.

Regarding terrorists: white people can be terrorists.  Black people can be terrorists. Women can be terrorists.  In fact, right at this moment, there’s a woman on the FBI’s most wanted list.  And she’s not an Arab (can also be pronounced, Aye-Raab)! True, a lot of Aye-Raaaaaabs are indeed terrorists, and totally forget about the fact that we are fighting a war in Arab country right now, and our government needs to justify why we are there by making Arabs seem evil.  Arab horror films, novels and actions figures due out this Christmas season.

Regarding “American” women:  the net is all aflutter with peanut gallery commentary that Theresa Vail should have won; she hunts, she’s from Kansas, she has tattoos, she’s blonde, and she’s white.   By this logic, Davuluri didn’t win because she doesn’t live in a trailer.  But I digress.  Theresa Vail, like Nina Davuluri, was born in the United States, and I am willing to bet my boxed blonde hair that her ancestors probably aren’t originally from the good ole’ U.S. of A.  This is not to say that Theresa Vail lives in a trailer, or is a dumb southerner, but simply because she possesses the aforementioned attributes, she does not have a golden ticket to the top of the Miss America list.

Regarding “American” women who hunt:  Twitter troll Maria Gruba (whose page has mysteriously disappeared), a real American hunts.  In 2008, according to Vegetarian Times magazine, 7.3 million Americans (also pronounced ‘Mericans) were vegetarians, and that was five years ago!  Just think of all the un-‘Merican citizens who have betrayed their meat-eating flag since then!

Regarding why Nina Davuluri could actually be considered an American: she was born in America; she wears a bikini in public; she has big hair; she loves world peace; and according to the New York Miss America website, she believes in a healthy lifestyle…obviously a terrorist if you don’t love Mickey Ds.  And really, who cares whether or not she was born in the U.S. (because you know haters are going to ask for proof in two shakes), she’s trying to spread good will towards all, empower women, and she’s living the American dream.  Her family came to the U.S. 30 years ago, they made a life, and now their beloved daughter is catalyst for positive change.  When it comes down to it, isn’t that what being American is really all about?

Independence Day means celebrating freedom, so today we’re celebrating the hopeful freedom for all to marry!