What is Banned Books Week anyway? “Banned Books Week is an annual event celebrating the freedom to read. Banned Books Week was launched in 1982 in response to a sudden surge in the number of challenges to books in schools, bookstores and libraries. Typically held during the last week of September, it highlights the value of free and open access to information.”* 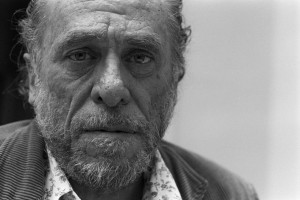 In 1985, Charles Bukowski’s book, “Tales of Ordinary Madness” was challenged and asked to be removed from a public library due to it being, “‘very sadistic, occasionally fascist and discriminatory against certain groups (including homosexuals).'”  Who is in the right?  How does one, or one group, deem art to be worthy or unworthy?  How does one group decide the level public exposure?  Does one person’s subjective resistance to a topic deem it suitable for termination?  Have you ever wanted to challenge a piece of film or literature?  Below is Bukowski’s response, which holds true today, over 30 years later.

Thank you for your letter telling me of the removal of one of my books from the Nijmegen library. And that it is accused of discrimination against black people, homosexuals and women. And that it is sadism because of the sadism.

The thing that I fear discriminating against is humor and truth.

In my work, as a writer, I only photograph, in words, what I see. If I write of “sadism” it is because it exists, I didn’t invent it, and if some terrible act occurs in my work it is because such things happen in our lives. I am not on the side of evil, if such a thing as evil abounds. In my writing I do not always agree with what occurs, nor do I linger in the mud for the sheer sake of it. Also, it is curious that the people who rail against my work seem to overlook the sections of it which entail joy and love and hope, and there are such sections. My days, my years, my life has seen up and downs, lights and darknesses. If I wrote only and continually of the “light” and never mentioned the other, then as an artist I would be a liar.

Censorship is the tool of those who have the need to hide actualities from themselves and from others. Their fear is only their inability to face what is real, and I can’t vent any anger against them. I only feel this appalling sadness. Somewhere, in their upbringing, they were shielded against the total facts of our existence. They were only taught to look one way when many ways exist.

I am not dismayed that one of my books has been hunted down and dislodged from the shelves of a local library. In a sense, I am honored that I have written something that has awakened these from their non-ponderous depths. But I am hurt, yes, when somebody else’s book is censored, for that book, usually is a great book and there are few of those, and throughout the ages that type of book has often generated into a classic, and what was once thought shocking and immoral is now required reading at many of our universities.

I am not saying that my book is one of those, but I am saying that in our time, at this moment when any moment may be the last for many of us, it’s damned galling and impossibly sad that we still have among us the small, bitter people, the witch-hunters and the declaimers against reality. Yet, these too belong with us, they are part of the whole, and if I haven’t written about them, I should, maybe have here, and that’s enough.

may we all get better together,
yrs,

Though it may seem a bit controversial to choose Charles Bukowski for my third selection of the National Poetry Month series, I feel that his commentary on poverty, race, corporate injustice, the environment, et al, earn him a spot.

DINOSAURIA, WE
by Charles Bukowski

Born like this
Into this
As the chalk faces smile
As Mrs. Death laughs
As the elevators break
As political landscapes dissolve
As the supermarket bag boy holds a college degree
As the oily fish spit out their oily prey
As the sun is masked
We are
Born like this
Into this
Into these carefully mad wars
Into the sight of broken factory windows of emptiness
Into bars where people no longer speak to each other
Into fist fights that end as shootings and knifings
Born into this
Into hospitals which are so expensive that it’s cheaper to die
Into lawyers who charge so much it’s cheaper to plead guilty
Into a country where the jails are full and the madhouses closed
Into a place where the masses elevate fools into rich heroes
Born into this
Walking and living through this
Dying because of this
Muted because of this
Castrated
Debauched
Disinherited
Because of this
Fooled by this
Used by this
Pissed on by this
Made crazy and sick by this
Made violent
Made inhuman
By this
The heart is blackened
The fingers reach for the throat
The gun
The knife
The bomb
The fingers reach toward an unresponsive god
The fingers reach for the bottle
The pill
The powder
We are born into this sorrowful deadliness
We are born into a government 60 years in debt
That soon will be unable to even pay the interest on that debt
And the banks will burn
Money will be useless
There will be open and unpunished murder in the streets
It will be guns and roving mobs
Land will be useless
Food will become a diminishing return
Nuclear power will be taken over by the many
Explosions will continually shake the earth
Radiated robot men will stalk each other
The rich and the chosen will watch from space platforms
Dante’s Inferno will be made to look like a children’s playground
The sun will not be seen and it will always be night
Trees will die
All vegetation will die
Radiated men will eat the flesh of radiated men
The sea will be poisoned
The lakes and rivers will vanish
Rain will be the new gold
The rotting bodies of men and animals will stink in the dark wind
The last few survivors will be overtaken by new and hideous diseases
And the space platforms will be destroyed by attrition
The petering out of supplies
The natural effect of general decay
And there will be the most beautiful silence never heard
Born out of that.
The sun still hidden there
Awaiting the next chapter.

© Jillian Mae McKeown, www.exploringfeminisms.wordpress.com. 2016. Unauthorized use and/or duplication of this material without express and written permission from this blog’s author and/or owner is strictly prohibited. Excerpts, pictures and links may be used, provided that full and clear credit is given to Jillian Mae McKeown and www.exploringfeminisms.wordpress.com with appropriate and specific direction to the original content.
Loading Comments...
Comment
×
%d bloggers like this: