10.  Eva Braun: Life with Hitler by Heike B. Görtemaker

This book epitomizes the phrase, “there’s a lid for every pot.”  Little is known about Eva Braun, the woman who was romantically linked and died with Hitler, due to the fact that towards the end he ordered all existing documents to be destroyed, even ones kept by Braun.  However, author Heike B. Görtemaker has pieced together through existing documents and letters a plausible picture of their courtship.  Görtemaker gives us a tale that can be both gripping and questioning, leaving much open for the reader to gather his or her own conclusions as to the validity of Hitler and Eva Braun’s relationship.

9.  Shaken, Not Stirred by Tim Gunn 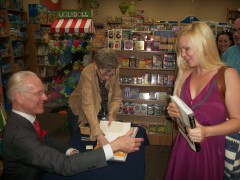 In this Kindle-only short story, Gunn briefly describes his father’s physical deterioration due to alcoholism and Alzheimer’s disease towards the end of his career, and the subsequent effect on his family.  Holding true to steadfast Tim Gunn-style, he is candid, witty, and introspective, thereby recognizing the flaws in his past and kneading them into something fruitful for the future. 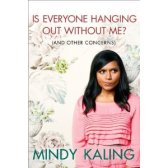 8.  Is Everyone Hanging Out Without Me? by Mindy Kaling

Mindy Kaling, also known as Kelly Kapur on the American version of the “Office”, has written an intelligent and introspective autobiography that offers us insight into the life of a truly funny woman.  Kapur’s writing is highly accessible: she’s sweet, silly, candid, and she possesses an incredible gift that makes you care about her, even though you’ve never met her. 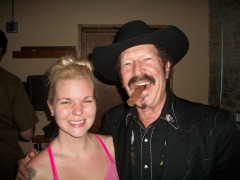 If you don’t know Kinky, get to know Kinky; the best Jewish cowboy country singer turned Jewish cowboy mystery writer around.  Friedman’s body of work, both fiction and non-fiction is impressive so it may be difficult to find a starting place besides at number one.  If you are going to skip around, then Armadillos and Old Lace (next to Elvis, Jesus and Coca-Cola) would be a safe bet.  Though peppered with slight vulgarity and delinquent humor (mercy!), Friedman always manages to be tender.  The main character, aptly named Kinky, loves animals, old ladies, his cigars, drinking, and saving the day.  He’s a good old boy with liberal sensibilities and stands up for those without a voice.  It’s a light mystery and you know that when  you get Kinky, you always get a happy ending.

6.  Girl Walks into a Bar by Rachel Dratch

Saturday Night Alum Rachel Dratch has written an adorable memoir about becoming accidentally pregnant in her 40s to a man that she is casually dating.  If you need an uplifting true story, especially to do with having children past what society deems to be your “prime” years, then definitely give it a go.  Dratch is a rebel who doesn’t apologize for her life choices and relays her experiences with honesty and a gentle touch; she’s to the point, but doesn’t come down too heavy.

This book was an accident.  As I was perusing the horror table at the Printers’ Row Book Fair in early 2012, I picked up this book whose appeal factors included grave robbing and corpses, and thinking it was adult fiction, bought it.  Little did I know that in all actuality, it was young adult.  Little did I also know is that teen/young adult novels can be as gory and poignant as an adult novel.  The great thing about this novel, and perhaps in many teen novels, is that little is open to interpretation because it’s messages are blunt; very little beating around the bush.  Sometimes, don’t we all just want to be handed a message that we can understand immediately?  I know that sometimes I do.

4.  I Hate Everyone, Starting with Me by Joan Rivers

Women aren’t supposed to be funny without femininity.  It may sound archaic, but women are only allowed to be accepted into our society on a large-scale unless their mouth is paired with pretty.  Pretty looks, pretty hair, or pretty jokes intermingled with ugly ones.  Rivers tosses her jokes in the face of a society that is based on the consumption of pretty, feminine women.  She offends everyone to the most extreme degree, including herself, but it’s all one big joke.  Does she really hate mentally disabled children?  Of course not.  It’s all part of staying true to the purity of her craft.  She gets plastic surgery because she understands that no one wants to see an old wrinkled woman on television (isn’t that the ultimate paradox?), but then she uses her place in the spotlight to subvert what is expected of her as a female comedian.  In a nutshell, Rivers’ book is an offensive hoot.  Have fun.

3.  Amy, My Daughter by Mitch Winehouse

Written posthumously by Amy Winehouse’s father, Mitch Winehouse pays the ultimate homage to his daughter–he writes her life.  Previous to picking it up, my knowledge of Amy’s life and music was limited to what the radio stations doled out, which was mainly negative gossip.  MW paints Amy as realistically as a father can, except he ups the credibility factor with fault.  He finds fault with himself and with Amy, and this is what brings the reader in because really, who wants to read 300 pages of praise?  If so, where can connections be made?  MW ultimately lets us grieve along with him, his family, and for the tragedy that was Amy’s death.

2.  The Bedwetter by Sarah Silverman

It’s jarring to hear a woman be so vulgar, compared only to the likes of Joan Rivers and a sprinkling of other female comedians who don’t give two shits about what mainstream culture says about them, but it’s also extremely refreshing.  Silverman’s no-holds-barred tongue is just the ruffling of the waters, much like Rivers’ book, that is needed to chip away at gender inequity, bit by bit.  Silverman’s book is a memoir of how comedy entered her life and how she has existed in that world.  Bedwetter is sometimes a tangled tale of inequality in the comedy arena that leaves you pissed off, intertwined with inspiration and gumption that makes you glad that there are women like Silverman out there who are disrupting at least one person’s sleep.

1.  It’s Always Something by Gilda Radner

If you are seeking a solid story that leaves you feeling truly human and truly grateful, then read Radner’s autobiography.  In it, she hands us raw Radner on a plate and it leaves you completely changed at the end.  Radner’s memoir is one of cancer and her will.  She takes us on a journey that is the definition of bittersweet: getting cancer, its recession, fathoming her own possible demise, the ebbs and flows of hope, and her relationships and their own dealings with her cancer.  This book was written over twenty years ago and it reads as if it were written yesterday because love, friendship and struggle are (un)fortunately constants in life.

As of a month ago, I knew very little about Amy Winehouse.  I remember when the song Rehab flooded the U.S. airwaves, forever imprinting her voice on our collective mind, whether we were fans or not.  When she died in July of last year, I, like many out there living much of our lives on the Internet, snickered at jokes made on Facebook, “she should have gone to rehab, yes, yes, yes” and other insensitive mockery.  All I knew of Winehouse was what the media fed us on a mass scale: a drugged up, anorexic mess with a tumultuous relationship with husband Blake Civil-Fielder.  When she died, the general consensus was that it was bound to happen given her drug abuse and lifestyle.

In June of this year, the biography Amy, My Daughter hit the stands, written by Mitch Winehouse, Amy’s father. 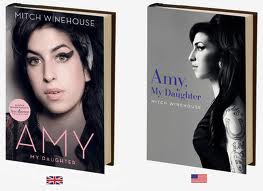 It was an intriguing concept, a book written from a father’s point of view on his deceased daughter.  Not knowing what exactly to expect, I gave it a go and found that it’s appeal factor would extend to a number of people in a number of directions.  It’s about love: familial, romantic, platonic and artistic.  It’s about passion.  It’s about God-given talent and creative output.  It’s about loving someone with an addiction and it’s about helplessness.  It’s about perceptions of addiction.  It’s about relapse and struggle.  It’s about the media and how they filter the truth.  It’s also about how one loser can really fuck up your life.

Mitch Winehouse’s writing is honest and accessible and doesn’t bog you down with self-pity or an over-inflated picture of Amy (besides what your typical father doting allows).  He begins with the end of Amy’s life, and then backtracks to her childhood through adulthood to the end again.  Much of the book describes her spunky personality and close-knit family unit.  Given all the negative press about Amy, it’s a wonder that she came from such a grounded and supportive family.  Even her parents, who divorced when Amy was young kept a friendly relationship thereafter.  When Mitch describes her addiction and his reaction to it, he holds nothing back, including the ugliness of Amy’s actions, and similarly the ugliness of his response.  His candid storytelling adds credibility to his point of view because he admits to situations where he may be seen as less than honorable, and dares to cast his daughter in a negative light for the sake of truth, whereas most parents tend to inflate their child’s persona.  He tells her life as he remembers it, and he remembers it well because he kept a diary throughout her years of stardom and addiction documenting their family’s highs and lows. 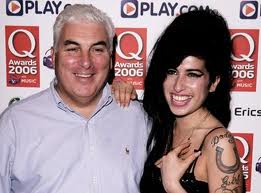 AMD carries you through her 27 year-old life and career, revealing details that allow you to gain a more thorough understanding of who Amy was as a woman and an artist.  For example, Amy wrote all of her own songs, which is surprising in this culture of mass produced, factory style music.  Because of her songwriting style, each song is a small window into a very personal and often painful time in her life.  Another surprising facet of Amy’s life was that she didn’t abuse drugs or alcohol until the met Blake Civil-Fielder, whom she later married and divorced.  Popular notions of the musician paint pictures of a hardcore addict who lived on the edge, but as her father reveals there were often spurts of sobriety where she would write and spend time with her family, but she always struggled daily with drug abuse, especially when using with Civil-Fielding.  After her husband was thrown in prison for bribery, Amy was able to get clean of hard drugs, which translated to alcoholism and was the ultimate cause of her demise.

Amy’s music acts as a bittersweet reminder of an extraordinarily talented young woman who suffered from substance abuse and died as a result.  It’s a sad wonder to think of what she could have done in the future, but luckily for us we are able to enjoy the three albums that she was able to create during her short life.  This book is a historical blueprint that enriches how we experience her music.  Mitch Winehouse’s biography on his daughter is essential reading in order to truly understand the woman behind the music.