It’s Not Really About the Hair: The Honest Truth about Life, Love, and the Business of Beauty
by Tabatha Coffey

There are few modern day Bibles that are published today, one of them being Tim Gunn’s book, Gunn’s Golden Rules, and hairdresser, entrepreneur, TV celebrity, and really, goddess, Tabatha Coffey’s book earns a way onto the bookshelf, next Mr. Gunn’s.  Tabatha’s insight into personal growth, loving others and yourself is truly insightful.  Yes, she is a television personality and a celebrity, but unlike so many celebrities today who earn their stardom through their family lineage or their plump posteriors, Coffey has earned her recognition because she is full of sass and moxie, makes pragmatic life decisions and truly respects herself.  Her philosophy is honest, down to earth, and she preaches complete self-acceptance.  True, easier said than done, but she has the amazing gift to make it seem as if she’s holding your hand throughout the book, encouraging you to live an authentic life. 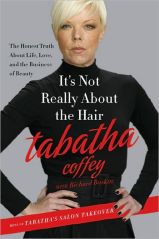 The American Way of Eating
by Tracie McMillan

Journalist McMillan goes undercover from west to east as she picks produce with Latino (il)legal immigrants, works at a Walmart in Detroit, and finally an Applebee’s in New York to see where our food comes from, and how it is disseminated to the public at places whose mission is to deliver mass amounts at a low cost.  What she experiences is truly eye opening; whether you are pro or con immigration, what she hears and sees firsthand regarding how immigrant workers are treated, i.e. dying from heat exposure from picking Charles Shaw aka “Two Buck Chuck” grapes, can’t help but make you feel a little queasy buying garlic from the grocery store.  Her undercover examination of where our food comes from, how it is harvested, and the costs to those who are on the front lines makes you question everything that you put in your mouth.

Last Rituals is the first in a series by Icelandic writer Sigurðardóttir that pulls together mystery, witchcraft, and a little bit of lovin’.  Main character, Thora Gudmundsdóttir, is single-mother and lawyer turned amateur private investigator with two children who has been created by Sigurðardóttir with restraint and wit.  If you’ve ever been to Iceland or its capitol Reykjavik, you’ll be transported back to the chilly country as you walk the streets with Thora as she investigates murder and explores the world of Icelandic witchcraft and folklore.

Let me begin by saying that I completely abhor dates, facts and especially, lineage.  Not only do my eyes glaze over with boredom, but the thought of reading a book filled with all of these makes the thought of cleaning my toilet seem really attractive.

However, thanks to James J. Swanson’s fresh writing style, we are saved from rubber-gloved servitude this time.  Swanson gives us dates, times, historical detail and characters, but does it in a way that is written more like fiction.  And though everything in the book is 100% fact, he details what the killers most likely saw, felt and smelled.  He describes relationships and friendships, disagreements and love all with such candid detail that it feels as if you are living the story firsthand.

A group of women with diverse experiences share their varied stories as to why they chose, or life chose for them, not to have children.  This book wouldn’t be called food for thought, but rather feast  for the heart.  Filled with comedy, tragedy, wit and even some schadenfreude, this book left me completely satisfied from beginning to end.  The real tragedy about this book is not that all of these women haven’t had children, but that most of them have left us with a lack of further writing to latch onto now that the book is over.