Though I did resist asking which sister was the evil one, I couldn’t hold back some other, let’s say, more pertinent questions

when I interviewed indie/folk goddesses Chandra and Leigh Watson, otherwise known as the musical group, the Watson Twins.

JM:  I read that you gals were born in Oklahoma and raised in Kentucky (and now live in Los Angeles).  How has living in Kentucky and/or the greater South influenced your music?

Chandra:  I think it definitely has…we grew up with the records our mom and older sister used to play: classic rock, country and folk along with us singing gospel music in our church choir.  As we got older we started going to local punk/experimental shows in Louisville and so our sound is a melting pot of all that we heard and experienced growing up.  It’s easier to identify with those influences when you live 3000 miles away, so I felt more connected to my home after moving away. Funny how that happens.

Leigh:  Growing up in Kentucky definitely had an influence, but different than what most might expect considering it is known for bluegrass.  That part of the country is a real melting pot of sounds and that influence allowed us to experiment and push boundaries with our own music.

JM:  You’ve put out five (five!) albums in under six years and I read from the bio on your website (www.thewatsontwins.com) that you have a forthcoming album due in 2012.  Incredibly ambitious is a phrase that definitely comes into my mind.  How do you keep each other motivated?

Chandra:  We try to help each other stay focused and positive…it’s strange, when one of us starts “losing steam” the other picks up the slack and pushes forward.  We are cheerleaders for one another and having that support helps us to keep making music and touring.  There’s also that “thing” inside everyone who HAS to write and create to stay sane…just when you think you’ve written your last song the creative spirit strikes.

Leigh:  Yes, definitely our own little cheerleading team.  I think we are both pretty encouraging to one another and also have a bit of competitiveness, if Chandra is working on music I know I should be too!  It’s the ying and the yang.

JM:  I was also surprised to see an additional sixth album sneak in there from 2009 called Live at Fingerprints. Can you offer a little more information about that one?

Chandra:  Fingerprints is an amazing Independent Record Store in Long Beach, CA.  Rand, who is the owner and champion of eclectic Indie music, asked us to do an instore and record it.  He then suggested that we release it and the rest is history. Always fun to release LIVE tunes as they are a very honest representation of the performer… for better or worse, ha!

JM:  How did you choose the tracks featured on your newest album of cover songs, Night Covers?

Chandra:  A few of them we’d been playing live: Bill Withers “Ain’t No Sunshine” and Sade “Sweetest Taboo” the others just sort of came along.  Listening to The Turtles on vinyl one night and “You Showed Me” came on…I thought what a great song, we should cover that…so we did.  The Black Keys “Tighten Up” was just more of a fun challenge, we are fans of the band and thought it would be fun to try and make it sound like a Watson Twins song…needless to say most folks don’t recognize it right off the bat.

Leigh:  The PJ Harvey song has such amazing lyrics and imagery.  She is one female artist who we have always admired.  “Here Comes The Rain Again” by the Eurythmics was a suggestion from my oldest nephew…little did he know we had been talking about it as well.  It had to be on the list.

JM: What is so great about Night Covers’ songs is that you completely make them your own, resulting in classics that actually sound like totally new songs.  Can you describe your process or mindset when setting out to reconstruct the songs that you chose?

Chandra:  Thanks for saying that…we do really try to make them our own as mentioned.  Much of our approach just has to do with the sound that we’ve created for the band over the years and now it’s just instinctual.

Leigh:  “Just Like Heaven” started our affinity for covers.  We had such a great experience with that song, arranging and recording the Night Covers record was a total guilty pleasure.

JM:  In the lyric credits for Fire Songs, I see that each of your names is next to different songs.  How much of your writing process is collaborative?

Chandra:  We usually write separately and then come together to work on harmonies, arrangement and production.  We’ve just collaborated for the first time writing a song for an indie film and are hoping to collaborate more on the writing side on the next record.

Leigh:  I feel like co-writing has been something we’ve been working towards.  We spent the last few records finding our individual styles and now are ready to make that step.  Our first collaboration went well and seems like that’s definitely part of our next recording.

JM: I think its safe to say that a lot of your songs include lyrics about relationships and/or love. Do you see these as connecting threads throughout all of your songs, and if not do you see any that have emerged?

Chandra:  Human emotion and our connection to others inspires me on many levels…all my songs stem from that, but some of those love stories are metaphors for other trials and experiences in our lives.

Leigh:  That subject pops into a lot of writing.  Love, heartbreak and relationships are things we can all understand.

JM:  Your style has been described in a number of ways: indie folk, Americana, alternative country, folk and so forth. Do you feel that within these comparable genres your music differs from that of your male counterparts (I’m thinking maybe Amos Lee, Iron & Wine, Elvis…)?

Chandra:  Wow, I never thought about it…I guess the big difference is that none of those fellas have a cool twin to sing sweet harmonies with. 🙂

Leigh:  I’m flattered to be listed along side those male counterparts.  The familial harmonies definitely are one thing that are distinctive to our sound.

JM:  You are playing Schubas in Chicago on September 20th.  Are you going to do anything extra fun while you’re here? 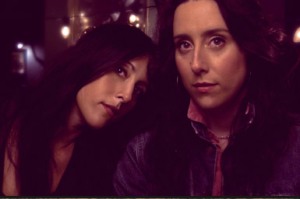 Chandra: We might just be cruising around sampling deep dish pizza…hard to say at this point, but we’ll keep you posted.

JM:  May I recommend Spacca Napoli?  It’s amazing.  And finally, if each of you could meet any singer/songwriter or artist who ever was or is, who would it be?

Chandra:  Another tough one, great questions btw…hummmm, I think it would have to be Dolly Parton.  I’ve always said over the years that she’s one person I’d like to have lunch with…her sense of humor is amazing I’m sure she’d have a story or two.

JM:  Thanks so much, gals and I’ll see you at the show!

3 thoughts on “Ain’t Your Ordinary Sister Act: An Interview with the Watson Twins”