Library patrons are always asking me, “what have you read (sometimes seen) lately that you loved?”  This is what I loved this week. 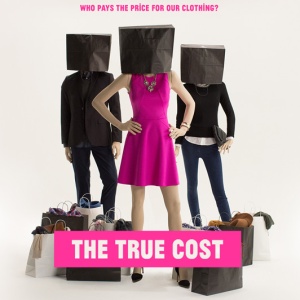 Why: As the title infers, the film is about the true cost of fast fashion, meaning what we purchase from the Gap, Kohl’s, Target, H&M, Uniqlo, Walmart, et al, clothing typically manufactured in third world countries with very little to no safety regulations protecting those making the clothing or their surrounding environment.  One example of the ugly reality of cheap clothing is when we buy inexpensive leather from a fast fashion brand, such as Target.  It’s produced in countries such as India, Cambodia or China, or from whichever factory offers the lowest price, and that trickles down to less pay for the employees, often for mere dollars per day.  Additionally, the dyes used to color the leather leaches out into their local environment, again, where there are very low to no environmental regulations, thereby poisoning the water and land that those making next to nothing, also commonly referred to as slave labor, depend on.

As a solution, the film stresses the importance of organic cotton (non-organic can actually contain GMOs), fair trade, which gives factory workers a higher wage, and if possible, locally made.  The cost of organic, locally made and/or fair trade clothing can be traditionally higher than a $10.00 sweater from Zara, but I’ve found that I’ve actually spent less money in the long run because my choices are now carefully considered, as opposed to purchasing mass amounts of cheap clothes that I typically never wore.  When I saw this film in 2016, it completely rocked my world by very clearly explaining how my purchasing power directly influences so many cogs on the planet, blossoming out from my local economy to the pollution in Cambodia to suicide in India.  The power of our purchases can literally be a matter of life or death for thousands of women, exactly like you or I, who work to earn a living and sacrifice their safety and health to just live.

Here are just a few of my personal favorites, but check out The Good Trade, an awesome website for lists of locally made, organic, fair trade, and really anything you’d want to know about ethically made clothing and products.